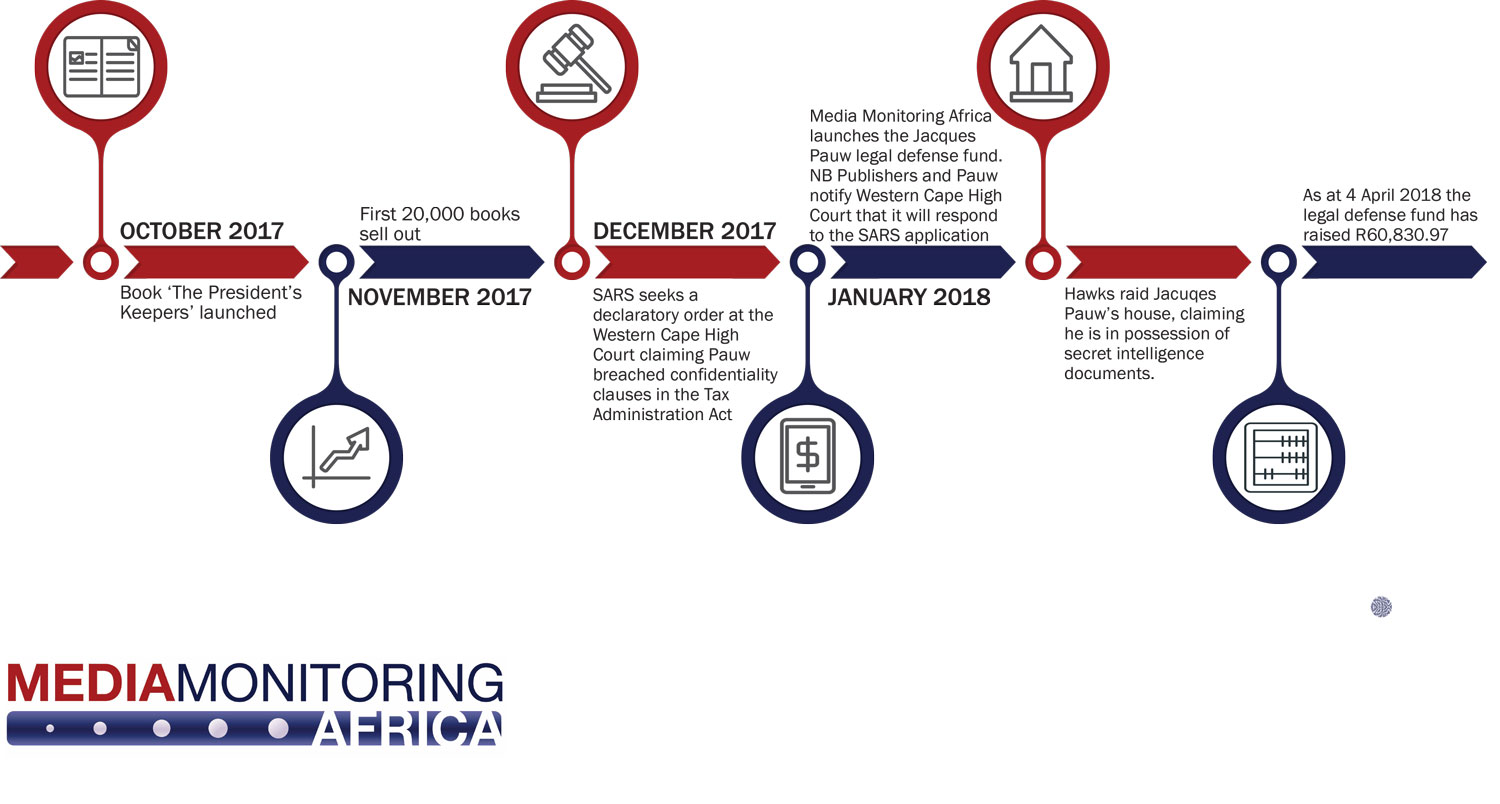 In response to the many kind offers from members of the public, Media Monitoring Africa (MMA) has established a legal defence fund for The President’s Keepers author , Jacques Pauw.

The fund – which is to be administered by MMA – is a non-profit donation platform set up to receive public, anonymous donations for fees and expenses relating to criminal or civil legal action against Pauw in respect of The President’s Keepers.

Since publication in October 2017 by NB Publishers, Pauw has been under fire from parties featured in the book, including the State Security Agency and KwaZulu-Natal police, the latter in apparent collusion with businessman and racehorse owner Roy Moodley.

The latest legal threat comes from the South African Revenue Service, which is asking the Western Cape High Court to declare that Pauw contravened the Tax Administration Act by revealing that President Jacob Zuma perverted the law-enforcement agencies of South Africa to hide from the public that he is not tax compliant and received a salary from Moodley while in office. NB Publishers will be responding on behalf of Pauw to SARS’s court application early this year.

In what amounts to a relentless campaign of intimidation, there have also been threats of civil suits against Pauw and NB Publishers.

Through attorney Willem de Klerk and with senior counsel, NB Publishers and Pauw have co-operated with the authorities but have also made it clear that they stand by the book, and are prepared to defend it.

Pauw, who exposed the apartheid-era Vlakplaas death squad, is one of South Africa’s most experienced and respected investigative journalists. The news late last year that a KwaZulu-Natal police officer and magistrate are to be investigated for possible misconduct after warrants of arrest were issued for Pauw and The Republic of Gupta author Pieter-Louis Myburgh is a vindication of investigative journalists in South Africa. The Witness newspaper has revealed that the complainant in the case was Moodley, who is a friend of Zuma’s, and that the charges laid were of fraud, forgery and crimen injuria (criminal defamation). The warrants have since been rescinded.

NB Publishers and Pauw have been touched by the support shown by so many South Africans for the author in this stressful time, and they are grateful to MMA – which has a proud recordas an independent watchdog on SA’s media – for setting up and running the fund. When it is clear that the fund is no longer necessary, any remaining money will be used to help the legal defence of individuals and organisations whose right to freedom of expression is infringed upon due to legal action being taken against them or to develop policies that promote, ensure and secure media freedom.

For more information on how to donate, you can contact:

Q: Why should the donations be anonymous?

A: To safeguard the integrity of the author.  Nobody wants Jacques Pauw to be put in a compromising position, for instance, feeling beholden to someone who has made a donation, even if is made with the best of intentions. His independence as an investigative journalist needs to be protected – and respected.

Q: What if I don’t want to be anonymous? I would like Pauw to know I have donated to the fund.

A: Of course you may tell friends and your family – or anyone else. That is your constitutional right in a country that protects freedom of speech. But please understand Pauw’s need to be independent, to investigate without fear or, in this case, favour. Please don’t contact him to tell him of your donation. But also be assured: both Pauw and NB Publishers are very grateful for your support.

Q: The book has been a success, and NB Publishers is part of Media24, which is part of Naspers, so why can’t it pay the legal fees?

A: The President’s Keepers is totally unique. Big impact – but also high legal stakes. The legal threats continue to come, mostly from state organs, and, yes, NB Publishers is part of Media24 and Naspers. However, as a business unit, it is a separate legal entity from Naspers. It will not receive funding from the shareholder for this although Naspers may donate to the fund.

Most importantly, Media Monitoring Africa has set up the fund because you and so many other South Africans want to support Pauw. There have been many offers by so many individuals and organisations to help with the legal costs. It has bolstered his spirits while under fire – in what seems to be a sustained campaign to wear down both the publisher and Pauw. The legal defence fund is a crucial part of the answer to this campaign.

A: It is a neutral party independent of the author, publishing house and instructing attorney that will control the fund as a trust. This is to assure the public no donations will be used for anything other than legal costs for Pauw and in respect of The President’s Keepers.  Media Monitoring Africa has a proud record as an independent watchdog on South Africa’s media and promotes democracy and a culture where the media and the powerful respect human rights to encourage a just and fair society. Click here for more info about the organisation

Q: How do I know my donation is being used for Pauw’s legal fees, and not for anything else?

A: Media Monitoring Africa, which is a not-for-profit organisation, administers the fund, and is limiting payments to the legal costs for Pauw and in respect of The President’s Keepers.

Q: When the legal battles are over, what will happen to the remaining money if there is any left over?

A: Should there be any remaining money, it will be used to help the legal defence of other individuals and organisations. Media Monitoring Africa will put out a press release with the relevant information when the time comes.

Q: Can you give me examples of what the money will be used for

A: To fight criminal and civil cases. Since publication in October 2017, Pauw has been under fire from various parties featured in the book, including the South African Revenue Service, the State Security Agency and KwaZulu-Natal police, the latter in apparent collusion with businessman and horse-racing owner Roy Moodley. See these news stories for more information:

DA to lay charges of corruption against SSA’s Fraser

Pauw knew he might face years of legal trouble over book

Q:  Can I get my money back if there is money left over?

A: Unfortunately, no, because it is an anonymous donation and because it will be nigh-impossible to decide who gets what amount back. This is why it has been decided that the most fair, sensible course of action is to use the remaining money to help the legal defence of other individuals and organisations whose right to freedom of expression is infringed upon due to legal action or to develop policies that promote, ensure and secure media freedom.  Media Monitoring Africa will put out a press release with the relevant information when the time comes.

Q: Can I get a tax deduction on my donation?

A: Media Monitoring Africa (MMA) is a non-profit association, which in terms of Section 18 (a) of the Income Tax Act, means you may request a Section 18 (a) certificate from MMA to facilitate a deduction on your income tax for the amount donated to the fund.